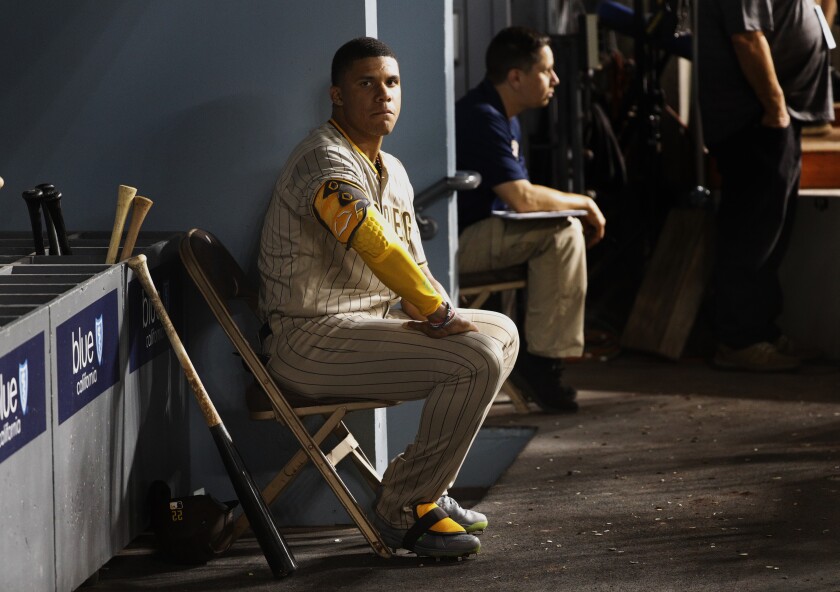 After the drubbing his team inflicted Friday, maybe he should have.

On a night that began with an emotional on-field ceremony commemorating the late Vin Scully, and that was supposed to showcase a supposedly revamped San Diego Padres roster following Tuesday’s trade deadline, the Dodgers instead cruised to an 8-1 win, extending their recent dominance over the rivalry in resounding fashion.

“I know our guys, our fans are gonna be excited for this series,” Roberts said before the highly anticipated three-game series. “You got to go out there and we got to play good baseball. So if we play good baseball, I think we’ll be fine.”

That, the Dodgers did.

They struck for four runs in the bottom of the first, twice benefiting from a misplay by Brandon Drury at third base to surge in front.

They doubled their lead with four more runs in the second, burying Padres starter Sean Manaea on two-run doubles from Chris Taylor and Cody Bellinger.

They salted away the series opener from there, receiving five scoreless innings out of Tony Gonsolin and little late resistance from their visitors.

For Juan Soto, Josh Bell, Josh Hader and Drury — the four high-profile additions the Padres made before Tuesday’s deadline — it was their first time losing to the Dodgers in a brown and yellow uniform.

For their Padres teammates, however, Friday was nothing new.

It was the sixth time in eight meetings between the teams this season the Dodgers were victorious, and the 15th time in the last 17 dating to last year.

It stretched the gap between the teams in the NL West standings to 131/2 games, a seemingly insurmountable advantage with two months remaining in the regular season.

And it felt like an emphatic post-deadline rebuke from the Dodgers (73-33), who stayed relatively quiet during the deadline while the Padres (61-48) outbid them for Soto and Bell, surprisingly snagged Hader in the back of their bullpen and added Drury to the lineup.

“Obviously they had a couple big pickups,” Taylor said.

Added Roberts, when asked about Soto, in particular: “It is what it is. He’s a great player. It certainly makes our job a little bit harder, a lot harder. But there’s nothing we can do. We’re not going to run from it.”

The Dodger Stadium crowd sure didn’t. Barely a week after serenading Soto with “Future Dodger!” chants when he visited as a member of the Nationals, the 23-year-old outfielder was greeted by a chorus of boos during his first trip to the plate Friday.

It was one of the few times a sellout crowd of 52,714 did something other than cheer.

After taking part in the pregame ceremony — in which Roberts led the stadium in reciting Scully’s famous phrase, “It’s time for Dodger baseball” — they roared to life when Drury threw away a bases-loaded grounder in the first, allowing the game’s first two runs to score.

They were on their feet again moments later, when Hanser Alberto hit a two-hopper past Drury and down the line for a two-run double, then once more in the third when Taylor (who was playing his first game in a month because of a foot fracture) and Bellinger tacked on two-run doubles.

Gonsolin, meanwhile, settled into a groove after a laborious first two innings, going on to complete his fifth start of at least five shutout innings this season. And the game was so far out of reach by the seventh inning, Soto was replaced for a couple innings of rest.

Friday’s result aside, the Padres still seem like much bigger threats than they did during their previous visit a month ago, when they were nearly swept in a four-game series in which their slumping offense scored just eight times.

“You certainly have to give Padres ownership, Peter Seidler, a lot of credit,” said Roberts, a former Padres player and coach who said he’d never seen the franchise with so much buzz.

“When people are talking about the Dodgers and the Padres, the National League West, big trades, spending money on great players — I think we all win.”

The Dodgers don’t seem infallible, either, with their pitching staff taking another blow Friday when Clayton Kershaw was placed on the injured list with low back pain — an issue the Dodgers hope will keep the left-hander sidelined for no more than about a month.

“He’s certainly frustrated, but there’s nothing we can do about it,” Roberts said. “I think his only focus is to do what we can to get him back as soon as possible, and healthy.”

For now, though, any thoughts about the Padres challenging the Dodgers’ NL supremacy will have to wait. Their lineup might be more imposing. Their roster is undoubtedly deeper. But on Friday, the Dodgers’ recent torment of the Padres persisted. Not even a new-look Padres roster could prevent more of the same.