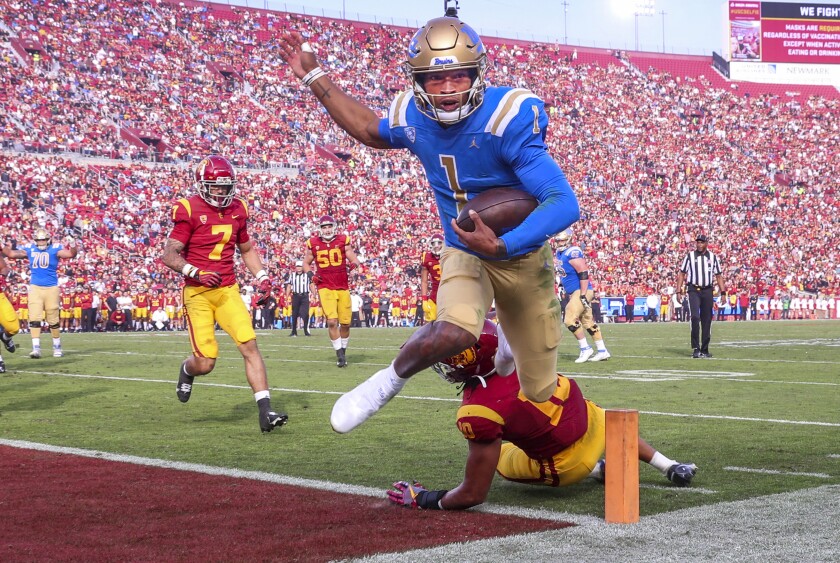 They saw dolphins, shared a meal and toured the waters around Marina del Rey, all courtesy of their fifth-year quarterback.

Dorian Thompson-Robinson handled the tab for the yacht rental thanks to his name, image and likeness riches, the Wolf of Westwood sharing the ride with his teammates on the UCLA offense.

He also delivered a message on the eve of his final college training camp.

“I let them all know this is it,” Thompson-Robinson told The Times, relaying his directive. “I don’t get any more shots at this. I’ve got five more months, I’m going to love the hell out of you guys and give you everything I’ve got and I hope you do the same for me.”

And so it begins, the start of the last season for the quarterback who has largely been dismissed, disregarded and flat-out dissed since that day in September 2018 when the true freshman trotted onto the perfectly manicured Rose Bowl field as an injury replacement for graduate transfer Wilton Speight in his first college game.

The progression hasn’t been linear, more losses than wins on his resume, but few Bruins have been guttier while ascending school record charts.

Even after Thompson-Robinson engineered a historic 62-33 beatdown of USC as part of a three-game winning streak to end last season — his hurdling of a Trojans cornerback now etched in rivalry lore — he was discredited anew. The media picked Thompson-Robinson as only honorable mention All-Pac-12, behind first-team selection Caleb Williams of USC and second-team pick Cameron Rising of Utah.

For some perspective, Williams hasn’t thrown one pass as a Trojan and Thompson-Robinson is possibly just months away from breaking Cade McNown’s all-time passing record as a Bruin.

What’s a veteran to do? Just grin, baby.

Thompson-Robinson appeared grateful as he met with reporters Friday after his team’s first training camp session, his hoarse voice a function of unleashing every decibel at his disposal while guiding the offense.

“Screaming and yelling, doing calls and everything,” he explained, “so always using my voice.”

There was the usual first-day hubbub, players gathering in (somewhat) orderly lines before bursting ahead in drills, the shriek of whistles and the cacophony of coaches barking orders a constant during the roughly 20 minutes reporters were allowed to observe.

The tone was decidedly upbeat, UCLA athletic director Martin Jarmond sporting a hat with a rose on it even though his school has not appeared in a Rose Bowl game since Jan. 1, 1999. Freshman receiver Braden Pegan made the catch of the short open session, undoubtedly hoping it’s a prelude to greater things.

Left tackle Raiqwon O’Neal, a transfer from Rutgers, made his practice debut as part of a rejiggered offensive line that featured the return of interior lineman Sam Marrazzo from an undisclosed injury. Absent were tight end Mike Martinez and linebacker Damian Sellers, though no explanation was forthcoming given that coach Chip Kelly was not scheduled to meet with reporters until Saturday.

Defenders spent several minutes swiping balls out of teammates’ hands as part of a strip drill, the takeaways an emphasis of new defensive coordinator Bill McGovern.

Linebacker Bo Calvert joked that the defense was disappointed it was not invited on the boat trip, Calvert sending a message after his own beach getaway with teammates.

“I took a video,” Calvert said, “and I was like, ‘Hey, all the defensive guys rented out the beach.’ … Dorian took all the offensive guys out, so the defense was a little salty about that, but it’s all good.”

As he glanced at the practice turf gleaming with late-morning heat on a bright, sunny day, Thompson-Robinson was asked what advice he would give to the version of himself preparing for his first college season.

It’s all about learning how to be a quarterback, he said, a more complicated endeavor than it might seem.

“Everybody thinks you just go out there and throw a ball and you lead,” Thompson-Robinson said, making quotation marks with his fingers to denote the ambiguity of the concept. “What’s leading if you don’t know what you’re doing? So I think that’s really what it is. I’m just going back and trying to teach [true freshman quarterback] Justyn [Martin] everything I wish I knew back then and trying to keep him on the right path.”

What’s does leading mean to Thompson-Robinson?

If the Bruins go where none of their predecessors have gone in nearly a quarter-century, they might point to the quarterback and the “Love Boat” as the impetus for some special things.