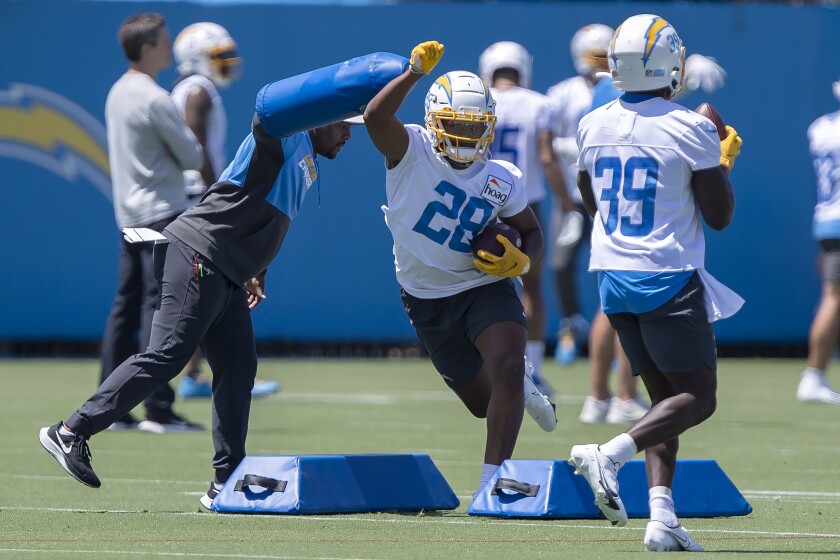 Since he was drafted, the Chargers changed their coaching staff and invested picks in two more running backs.

His three most productive games remain the first three of his NFL career, back in 2020.

Now entering his third season and facing as much competition and uncertainty as he ever has, Joshua Kelley arrived at training camp in Costa Mesa a changed man.

Coming out of UCLA, Kelley’s future appeared to be on immediate display under the previous coaching regime of Anthony Lynn.

He carried 43 times for 167 yards through the first three weeks of the 2020 season, serving as a much-needed counterpunch to starter Austin Ekeler.

But Kelley lost fumbles in back-to-back games — both losses, against Carolina and Tampa Bay — and has been trying to recover since.

He said he dedicated himself this spring to improving physically, enlisting the help of Overtime Athletes, a training outfit in Florida recommended by former Chargers teammate Rayshawn Jenkins.

“I evaluated myself,” Kelley said. “I looked at my strengths and weaknesses, and I felt like I could put on some more muscle, add some more explosiveness. I took the program I had seriously and just attacked it.”

Brandon Staley, who took over after Lynn was fired following the 2020 season, said Kelley is “much stronger, much more compact” in this training camp. He praised Kelley for being “a more complete back.”

In the Chargers’ preseason opener Saturday at SoFi Stadium against the Rams, Kelley will have an opportunity to showcase his new self as he battles for the No. 2 running back spot.

He’ll be competing against Isaiah Spiller, a fourth-round pick this year, and Larry Rountree III, a sixth-round pick in 2021.

“These backs … I really like the progress of all of them,” Staley said. “I think the competition is bringing out the best in them because it’s a real competition.”

Along with strength training, Kelley said his offseason program emphasized nutrition. He is still listed at 5-foot-11, 212 pounds — same as last year — but Kelley does appear to be more stout.

“Nutrition was huge,” he said. “You don’t get this size and this strong without being on top of your nutrition and your recovery. So, yeah, it was a lot of work.”

Kelley explained that he now feels like a different player on the field. He has broken several impressive runs in team drills, though the Chargers don’t tackle to the ground in training camp.

“I’m just like — boom! — more explosive, faster, stronger,” Kelley said. “It’s a big difference. There’s a correlation between the weight room [to] nutrition to the field. It feels good. They got me right.”

Staley also noted that Kelley has gained the trust of his teammates in pass protection, a vital component to an offense that features a Pro Bowl quarterback in Justin Herbert.

For young running backs, pass protection often is one of the most difficult steps in transitioning to the NFL. Kelley said that early on he had to focus simply on who to block.

He explained that, now with a greater understanding of the offense and his assignments in it, he has graduated to trying to become a weapon in pass protection.

“I put on some strength,” Kelley said. “I’m not trying to absorb contact. When I’m watching tape, I see a lot of guys just go up there and absorb. I’m trying to deliver a blow. I think that’s helped me.”

Another area that could greatly impact the backup running back decision is special teams. Kelley played more special teams as a rookie than he did last season.

One of the lowlights of his 2020 season was a blown assignment that led to a blocked punt and touchdown for Jacksonville.

Kelley said Ryan Ficken, the Chargers’ new special teams coordinator, met with him early in the offseason and told him he was too good of a player not to be contributing in that area.

“I agreed with him,” Kelley said. “I felt like I needed to take this phase way more seriously, attack it and just go harder. … It mostly comes down to effort and want-to.”

Kelley figures to be featured on offense and in the kicking game Saturday, when the Chargers take their first major step in figuring their season-opening roster.

Kicker Dustin Hopkins missed practice Thursday because of a death in his family. He was back on the field later in the day after rejoining the team. … Staley said quarterbacks Chase Daniel and Easton Stick both will play against the Rams. He also said Storm Norton and Trey Pipkins III, battling for the starting right tackle job, will play.