The American right’s future involves waging a ‘religious battle’ against the left, leaders say at a conservative conference 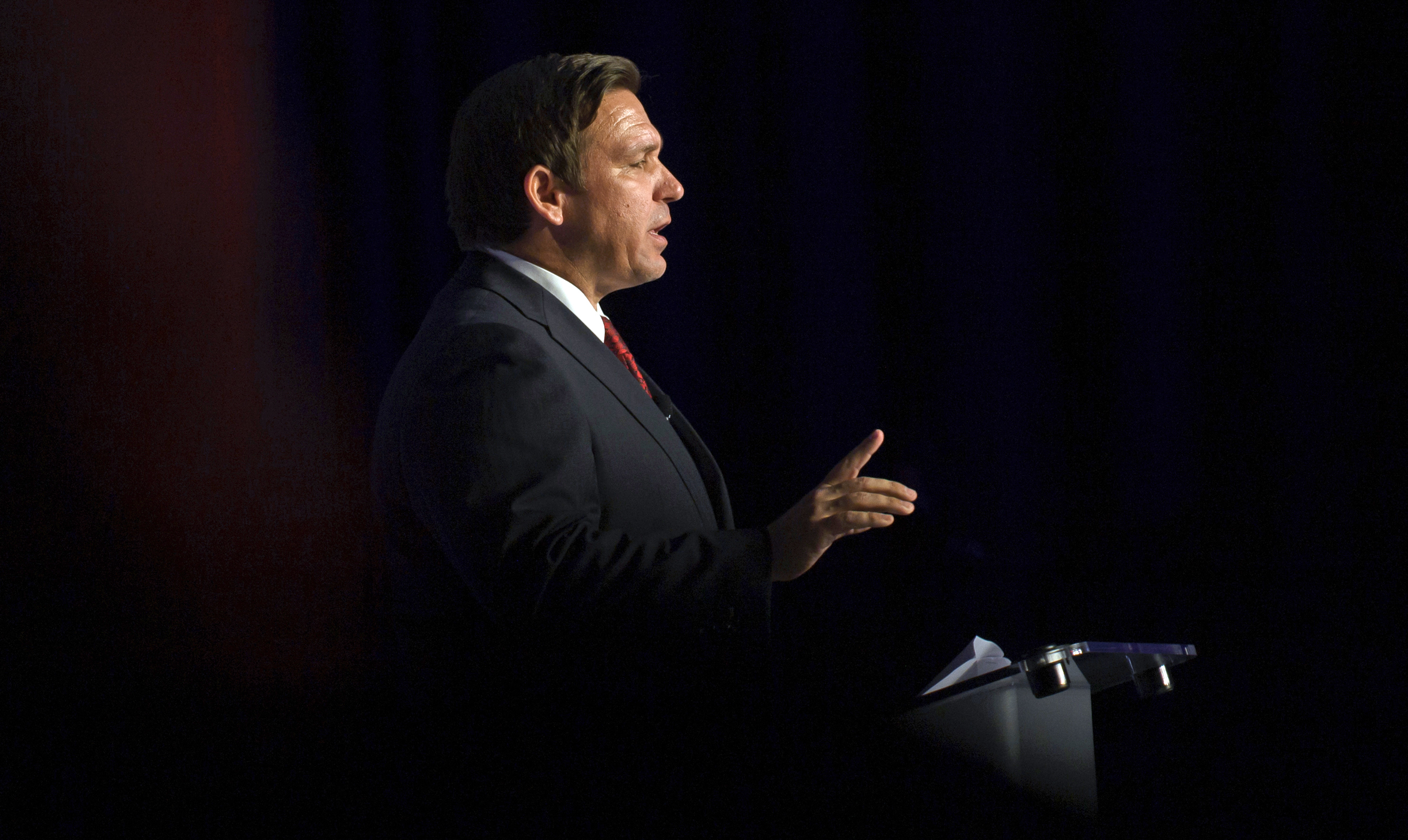 MIAMI — In a luxury Miami resort earlier this month, leading conservative politicians, influencers and academics gathered to formulate a grand path forward for the American right.

Repeatedly, speakers here framed the ongoing fight against the American left in biblical terms — a “religious battle” in which Republicans must be unafraid to use state power to thwart progressive goals not just in government, but the private sphere, too. Those at the gathering often argued both the culture wars and a changing economy are a battle of Christian ideals vs. a new age secularism.

Again and again throughout the three-day National Conservatism Conference, or NatCon, these right-wing thinkers argued for putting an end to the era of small-government conservatism while promoting religion at the center of public life.

Closing the conference, Albert Mohler, president of the Southern Baptist Theological Seminary, argued the divide in the country was one between Christian theology and a “woke religion that is raising itself up as the official state ideology,” adding that “insofar as conservatism as a movement has a future, it is a future that is going to be increasingly tied to explicit theological claims.”

Hosted by The Edmund Burke Foundation, a 3-year-old conservative organization aimed at promoting right-wing nationalism across the globe, and sponsored by some of the largest right-aligned advocacy groups and donors in the country, the conference was held at the J.W. Marriott Miami Turnberry resort in a space nestled between a swimming pool and two 18-hole golf courses, and with a restaurant serving up lobster rolls, short rib and filet mignon.

The conference serves as a gathering of so-called national conservatives, a movement that seeks to organize a cohesive, nationalist agenda in light of former President Donald Trump’s ascension in the GOP.

But Trump, while the subject of some praise, was hardly at the center of the gathering. This year’s conference featured warm welcomes for Sens. Josh Hawley, R-Mo.; Marco Rubio, R-Fla.; Rick Scott, R-Fla.; tech mogul and megadonor Peter Thiel; and Florida Gov. Ron DeSantis, who was introduced at the conference as the “future president of the United States.”

The conference distilled the animating forces of the American right at a time when Democrats control the presidency and Congress: a no-holds-barred approach to the culture wars; a turn away from laissez-faire economic policy toward one in which the cultural interests of conservatives are prioritized in decision-making; and, perhaps most importantly, a push for more religion in school and eliminating any separation between church and state.

“Without the Bible, there is no modernity. Without the Bible, there is no America,” Hawley said, criticizing the view of gender as a “social construct” as well as arguments that the U.S. suffers from systemic racism. “And their real target in all of this, I submit to you, is the inheritance of the Bible. What they [the left] particularly dislike about America is our dependence on biblical teaching and tradition.”

National conservatism is far from the mainline conservative ideology espoused in Washington, D.C., and on the campaign trail, but it is ascending within the GOP. But rather than celebrating their momentum, these conservatives raised concern over the sense that their views are underrepresented not only in elected government, but across the federal bureaucracy, in corporate boardrooms, on major online platforms and in the military. Meanwhile, the broader American left was repeatedly denounced as the “enemy” and a “regime” with “evil” ideas.

“I firmly believe that we American Christians — and in truth, Americans of any traditional faith and convictions — that we’re now living in exile,” right-wing writer Rod Dreher said in his address, adding, “We don’t know how much time we have before the persecution starts. But we can be confident that it is likely to come.”

(Dreher has called for the GOP to embrace the politics of Hungary’s autocratic Prime Minister Viktor Orbán, which has gained a larger audience among American conservatives in the past year. At the conference, representatives from Hungarian think tanks spoke on panels and handed out related literature.)

The conference was backed by substantial donations from conservative advocacy groups and think tanks that included the Common Sense Society, The Heritage Foundation and the Conservative Partnership Institute. Among other major contributors were Cathy and Alex Cranberg, both prominent school choice advocates, and Tom Klingenstein, chairman of the right-wing Claremont Institute, who in his speech assailed “white guilt” as “killing” conservative momentum and described Trump as someone who “may have been the worst president in any other time, but in this time, we were blessed to have him.” Trump, he said, “had just the constellation of assets that fit with our particular war.”

Many of the conference’s speakers and organizers signed a statement of principles that called for a “rejection of imperialism and globalism,” said economic policy “must serve the general welfare of the nation,” and pointed to declines in marriage and childbirth as grave threats to “the wellbeing and sustainability of democratic nations.” The Bible, the signatories agreed, should be taught as a source of “shared Western civilization in schools and universities.”

“Where a Christian majority exists, public life should be rooted in Christianity and its moral vision, which should be honored by the state and other institutions both public and private,” the document continued, adding that other religious minorities “are to be protected in the observance of their own traditions, in the free governance of their communal institutions, and in all matters pertaining to the rearing and education of their children.”

Brad Littlejohn, a fellow at the Ethics and Public Policy Center, a conservative think tank, told NBC News that “the necessity of leaning explicitly into the Christian foundations of American political order” has become “more emphatic” with each passing conference.

“You have to recognize that it is a religious battle,” Littejohn, who spoke on a conference panel, said of the divide between left and right, adding, “Progressivism has taken on increasingly religious overtones.”

“So a large percentage of Americans who don’t consider themselves particularly religious are still going to have to grapple with the fact that their political order is being shaped by a religious conflict,” Littlejohn continued. “And we want to make the case that the America that they would rather live in is one in which the values and political norms that come from Christianity are on the ascendant, rather than those that are coming from the kind of radical woke left.”

The question of Christian nationalism

The conservative promotion of religion is no new phenomenon. As one Republican strategist recently told NBC News, Republicans have been campaigning for 30-plus years on “God, guns and babies.” But the conference came as some Republican candidates and officeholders embrace what has been described as “Christian nationalism,” a strain of right-wing nationalism that calls for America to be an explicitly Christian nation in its laws and customs.

In Pennsylvania, GOP gubernatorial nominee Doug Mastriano — who has ties to a right-wing social media site whose founder is a prominent promoter of Christian nationalism — infused such themes into his campaign, arguing that the U.S. is a Christian nation and calling separation of church and state a “myth.” Rep. Marjorie Taylor Greene, R-Ga., has called for Republicans to label themselves “Christian nationalists.” Meanwhile, the storming of the Capitol on Jan. 6, 2021, saw some rioters featuring Christian nationalist imagery.

This strain of nationalism was a subject of some debate at NatCon. One panel featured a presentation titled “How I Learned to Stop Worrying and Love Christian Nationalism,” though some attendees saw a more clear distinction between the two nationalist ideologies.

“Sometimes people get swept up in the ideas of Christian nationalism,” Jordan Esrig, a senior at Vanderbilt University who attended the conference, said. “But I don’t think that is the aim [of national conservatives]. I think the aim really is to restore the moral roots of this country, which are in itself a restoration of the religious prudence of America.”

The most praise was reserved for conservatives who were seen as unafraid to command state power to advance their cause — none more so than DeSantis, widely seen as one of the most likely Republicans to carry the 2024 presidential nomination aside from Trump himself.

Speaking before a packed ballroom, DeSantis argued that conservatives need to curb their deference to the private sector. This year, the Florida governor signed legislation stripping Disney of longtime benefits it has enjoyed in the Sunshine State — home of Disney World — after the company lambasted the Parental Rights in Education legislation, dubbed the “Don’t Say Gay” bill by critics, that he championed. In blocking funding for a new Tampa Bay Rays training facility, he pointed to the team’s social activism. The team had donated to a gun safety advocacy group just beforehand.

“Corporatism is not the same as free enterprise,” DeSantis said. “And I think too many Republicans have viewed limited government to basically mean whatever is best for corporate America is how we want to do the economy.”

“If you want to have an American revival, yes, it requires electing good people, having good policy, but it also requires a recognition that it is just not in the electoral realm,” he said. “It’s also in the administrative realm. And it’s also more and more increasingly in the corporate and technological realm.”

Another star of the conference was West Virginia Treasurer Riley Moore, a leading critic of environmental, social and governance investing — an increasingly popular framework in the financial world for making socially conscious investments — by major financial institutions. West Virginia was the first state to pull out of an investment fund because of its commitment to net-zero emissions, and Moore now leads a 15-state coalition seeking to combat socially and environmentally conscious lending and investment.

At the conference, Moore lambasted ESG programs as “an unholy merger of left-wing cultural and corporate economic power that seeks to destroy the American fossil fuel industry by starving it,” adding that conservatives “cannot be afraid to use executive power on behalf of our people in their interest.”

In an interview with NBC News, Moore said the conference helps illuminate a growing conservative distancing from the libertarianism that has dictated GOP policy for decades.

“We need, in an overarching perspective, to be able to conserve the very unique culture and economy and country that we have here,” he said. “And it’s not just platitudes and talking points towards that. It’s like these things we’re talking about as actual implementation of that through policies and also, where appropriate, executive power.”

Channeling this energy, speakers including Scott and Thiel called on conservatives not to merely lament what they dislike, but to embrace a proactive agenda. Both men figure prominently in Republican efforts to recapture the Senate, where Minority Leader Mitch McConnell, R-Ky., has promoted an alternate strategy of framing the election entirely around objections with Democratic governance.

Thiel said Republicans should rally around “a program positive vision, something like that, to be credible.”

“And certainly my scoring on the ’22 cycle is we’re doing even less well than the ’94 Contract [With] America, we’re doing less well [than] in 2010, the tea party stuff in 2010,” said Thiel, who is a major benefactor of GOP Senate candidates such as Blake Masters in Arizona and J.D. Vance in Ohio. “And we’re leaning way too far into the pure nihilistic negation.”